Since the time he dedicated to paint, Paul Giudicelli never stopped working. He sensed he didn't have enough time to paint and did it in a compulsive and continuos rhythm. It is very important to locate ourselves regarding Giudicelli' s work, this description of his studio was made by the poet Manuel Valerio: "The studio of a painter is the universe where the creator recreates at the time his creations are coming out of his hands".

In his way, the artist surrounds that universe with confortable environment to make better his permanence in that territory in where all the things are offered very different from the conventional decoration. Giudicelli' s studio offers the characteristic of all studios, but also shows in an angle, an original and suggestive world.

It's amazing the universe of things inside Giudicelli' s Studio. In the walls the pictures are mixed with masks, simulated with rests of animals, in a board we see a collection of tiny manikins, simulating a procession of representatives of all the human conditions. Humanized beings (is the appropriated phrase). The tragedy created by the livings was included in these used up tiny figures, that at the edge of rolling definitely, with their gestures, they try to look more like humans.

Inside this picture, a bat appears suspended in the space, maybe not getting used to be part of the show, a bird foot sticks its nails over a simulated head, a fugitive from a tribe of head hunters seems to smile, while sustains the clipper weapon.

A buddha without believers is also part of that unsettled environment of cranes, fishes, snails, and all that could result if the world is inventoried. Also two tambourines resembles two rounded joys that try to escape in secret of that heterogeneous environment.

All these things are not more than drops taken from what the time has humanized in the studio of Paul Giudicelli. A painter that defines the studio as his second stage, like a try of getting to the knowledge that must exist between the emotive strength and the expression, supporting himself on realism. And he also is aware that nature is the real masterpiece to backup the artist creation, after it is undressed of the dross that surrounds it, to show the values as art expressions.

The ethnic-psychological is what we can find in all his pictures and understands that shape, in an objective sense is not more than a new plastic value. 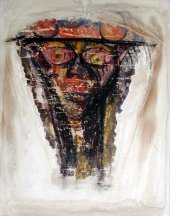