He was born on November 13th, 1919 in the Ingenio Porvenir in the Dominican Republic. His parents, Angel Giudicelli Grellasca and Paulina Plamieri de Giudicelli, were from Córcega (France), they came to the country as sugar cane owners to stay in the city of San Pedro de Macorís. The couple had seven children and Paul was the third one.

Paul Giudicelli lived in Porvenir until he was 5 years old, after he moved to a colony called "La Francia" in Boca Chica. In Boca Chica he lived until he was 9 years old. At that age he traveled with his family to France and he stayed for 2 years, he returned to the DR when he was 11 years old. Then he started his studies at Santa Ana College in Santo Domingo. He started high school while living in Santo Domingo but he left studies to start a commercial education, but he interrupted his classes because of his marriage before he was 16 years old.

There is a saying that Giudicelli married with the desperate wish of traveling out of the country and because his parents didn't allow him to do so, he escaped with his girlfriend, a very rich girl with the intention to realize his project. He was hidden of his family in La Romana but as he was very young he couldn't get a passport or a marriage license without his parents permission.

When his family discovered where he was hiding they sent him back to San Pedro where both families decided to celebrate the wedding. The couple moved to Santo Domingo and had 2 siblings: Pablo and Angel. Few years later they divorced and Paul Giudicelli remained single until the day he died.

Before he dedicated to paint he had many different experiences and stumbles in his life. First he became a seller, after he started buying gold in the streets of Santiago. Also he was a fruit dealer. After the failure of all those experiences he started in 1948 to study philosophy at the University of Santo Domingo, he was very distant to his family but after his children were born he reconciled with his parents and his economical condition lightened.

Paul Giudicelli started his guitar's lessons, but left them to dedicate completely to paint. In 1948, he met a Puerto Rican young lady pianist and singer, that was staying in his house, later she became his girlfriend. She encouraged him to start his painting classes at the National School of Bellas Artes. He started painting when he was 28 years old.

The decision was not very accepted by his father as he wanted him to stay working at the farm and he lost his economical support again. He received honor mention while realized his painting studies, by the General Director of Bellas Artes, for considering Giudicelli's work as the best work of that year. By that time Giudicelli was working as the director of an Elder's Home Care in Santo Domingo.

In 1953, he realized his 1st Individual Exposition in the National Art Gallery of Bellas Artes, showing 70 pieces in total, including oil painting, gouaches, watercolors, drawings and essays for murals.

Paul Giudicelli asked several times to the government a scholarship to study art out of the country but he never got it. Even though in 1959, the government of France gave him a scholarship to study art in that country he couldn't accept it because one of his sons, Pablo, had a political problem with the Dominican government. In 1960, he was hired as a painting professor by the National School of Bellas Artes and also as temporary watercolors professor at the Santo Domingo University. Then we was selected as sub-director of the National School of Bellas Artes but the assignments were removed after the political incident of his son Pablo with the government when he was assigned to the diplomatic mission in Costa Rica.

After Trujillo was executed (1961) Giudicelli was reintegrated as professor of the National School of Bellas Artes. In the Biennial of 1963, Paul G. Won the 1st prize of painting with his works "Meditation on a soldier armor". He was a pioneer not only of the modernism, that he introduced deeply in the Dominican painting, but also the work in ceramic tile and mosaic within the Dominican plastic activity.

Giudicelli realized during 1959 and 1961 several tile's murals, such as ones for the Town Halls of Luperon, Oviedo, Nagua, Sabana Grande de Boya (Triptych) Sabana de la Mar e Higuey, also he painted a mural for the Cock-fighting Hall ("Gallera") of San Juan De la Maguana. All this let us know that he was a very hard worker of the painting. He didn't mind if the work was difficult, he never had a mismatch between his work and his life. He kept his criteria about life and society through a testimonial work that tried to catch the social-ethnic-psychological essence of his country. Son of strangers was the most Dominican of the painters, and his life and work is a testimony of this.

His hard hearted work, dramatic and we can say auto-destructive work, leave to the coming generations, the defined structure of the Dominican Art. Because of the topics and the treatment he constructed them. His death only took his physical presence, the figure of the polemic and worker man, very modern and very antique at the same time, he had the first place in the plastic Dominican environment for more than 15 years.

Today, Giudicelli is a name and a legend, an example of determination and talent, and edge in the cultural heritage of our country, even though he has not received the recognition he deserves.

From 1962 until the time he died (1965) Giudicelli continued having successes in his life. He received the 1st prize of painting in the 1963 Biennial with his picture "Meditation on a soldier armor" and his work has adepts. We can say that Giudicelli dies in his best years, when his life and success started to solidify in front of his eyes. The painter didn't ignore he was dying.

Paul Giudicelli died painting and we believe that inside his painful extinction problem that he knew about, the artist took his last minimal breath of his existence to realize himself as a real man-artist. With 45 years old and 17 years being a painter, Giudicelli filled and ran wide time of evolution, he consumed in the creativity fire, his own creativity, like summer butterfly that does not remains until fall, but remains in the sensibility of those who have seen them.

For his process of integration we can understand that Giudicelli was not an esthetic painter, he felt the painting historically, in the dramatic result of its development. He was the same since he started painting but at the end, liberated, discharged in his work all his inside strength in a biological function. In his last work, Meditation on a soldier armor, he related yesterday with today.

Giudicelli liberated his personality, but never quit his problem- every artist's problem- the historic responsibility as a testimony. His unique and only subject was the human being as individual, taking it under his own and personal responsibility.

We said at the beginning, that Giudicelli lived burning constantly in his agitated life, consuming his material until convert it living and permanent for everybody because it will keep lighting to us and to those that will follow with his artistic work.

Giudicelli' s work keeps a searching and experimental road of diversities, and similitude's that help us to understand his expressive obsessions: The man and why he exists. Formal scheme, materials correspondent to the picture intention, and all these constants describe an ascendant work that took him to impact formal depurations that really can be part of the best American painting. 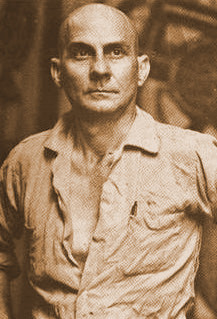